The International Student Scientific Conference (ISSC) 2015, sponsored by Wageningen University Fund and the Embassy of Indonesia in the Netherlands, was successfully held this past 28th November in the Forum building, Wageningen University. It attracted more than a hundred participants from various countries and academic backgrounds, all focusing their writing on the subject: ”Improving Food and Agricultural Products to Accelerate Sustainable Future”. Only a few of the submitted articles were selected for publishing and the authors were invited to present their research paper and poster. The event was opened with a traditional dance called Mandawung, performed by Maria Christy (PPI Wageningen), followed by an opening speech by Rusdi Hidayat (chairman of ISSC), H.A. Ibnu Wahyutomo (representative of the Indonesian Embassy in the Netherlands), and Prof. Dr. Ir. Arthur Mol (Rector of Magnificus, Wageningen University).

During the first part of the session, two keynote speakers elaborated each on their topic. The first speaker Dr. Ir. Peter Oosterveer, from the environmental policy group of the Wageningen Universty, talked about governing sustainability in globalizing food networks. He concluded that the major challenge that the world is facing today is the promotion of sustainability in food consumption, involving not only government and consumers but also NGOs and private stakeholders. The second keynote speaker was former Indonesian minister of agriculture, Prof. Dr. Ir. Bungaran Saragih MEc. He elaborated in depth on oil palm and palm oil and touched upon the historical development, production and, social, economic and environmental issues. He is convinced that oil palm is a crucial crop to Indonesia and will continue to become increasingly more important. There were two consecutive sessions, first on the topic society and environment and second on fundamental science and technological applications. In between, there was a short poster presentation by the selected participants. To conclude the event, the best presentation was awarded to Juliansyah Anita Yunus and Rebecca Patricia for their presentation on “Achieving Food Security by the Development and Utilization of Pitalah Ducks as Food Consumption with Health Proteins” whereas the award for best paper was awarded to Nelson Owuwu Ntiamoah for his research paper titled “Expanding the Gateway to Agricultural Sustainability through Inclusive Knowldege. Chairman of ISSC 2015 Captured Together with Important Guests: H.A. Ibnu Wahyutomo (representative of the Indonesian Embassy in the Netherlands), and Prof. Dr. Ir. Arthur Mol (Rector of Magnificus, Wageningen University) 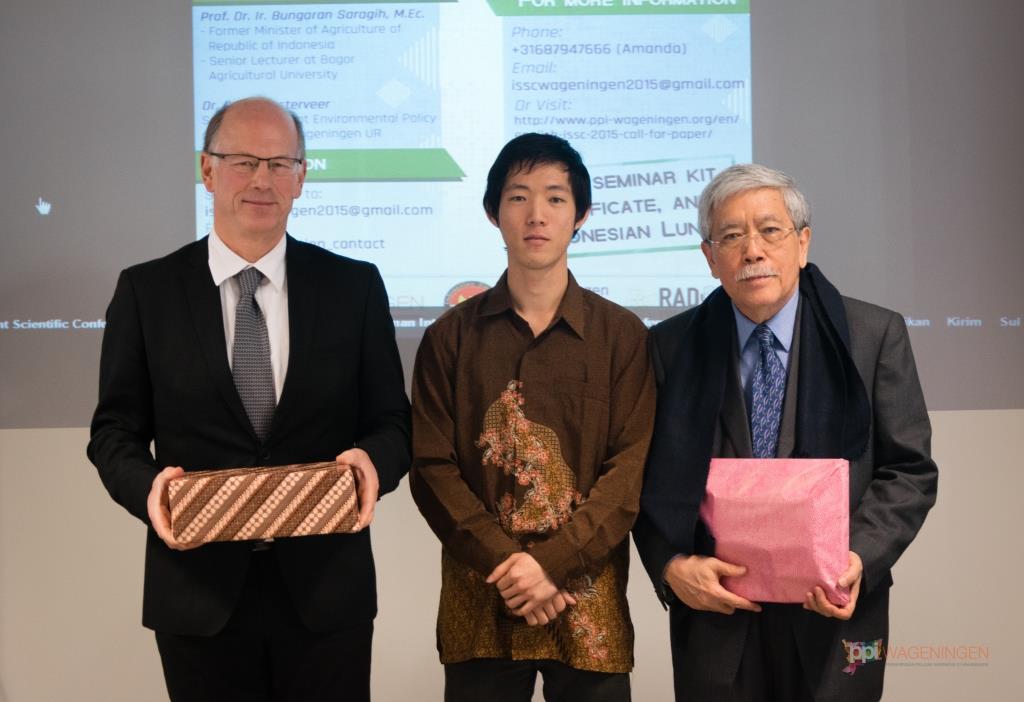 All the participants of ISSC 2015 Captured Together